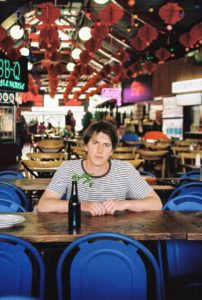 Brayden Sibbald is a songwriter and producer from the coastal town of Dunsborough in WA’s lush southwest. He writes and records soulful, beautifully crafted tracks using a mix of beats, synths, loops, samples, guitars and his unmistakeable vocals. Inspired by his surroundings, his music is textured and expansive, and has been compared to the likes of Jarryd James, D.D.Dumbo, James Blake, Chet Faker and Foals.

Picking up the guitar in school, Sibbald started out writing acoustic folk music, performing solo and with his band Needing Cherie. His talents were quickly noticed, taking out two songwriting gongs at the WAM Song of The Year awards in the folk category, and being booked to play Groovin the Moo and Fairbridge Festival. Sibbald also unanimously won a local competition to play the main stage at Southbound festival alongside acts like Peking Duk and Tash Sultana.

Fast forward a few years and Sibbald has matured and developed musically, utilising synths and other electronic instruments to create a dark contemporary sound. The title track from Float racked up more that 250K streams on Spotify in just two months, as well as earning triple j spins and kudos from radio heavyweight Richard Kingsmill.

The Tender Hearts
Scroll to top