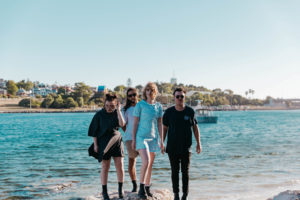 “Every now and then you’ll come across a band by accident that will absolutely floor you. This band did just that”  –  XPress Magazine

Perth band King Ibis create a distinctive mix of reflective indie folk and bright, high-energy pop tunes. Drawing on influences like the Jungle Giants and Middle Kids, they weave an array of personal stories into catchy hooks and ethereal melodies that lodge deep in your musical pleasure centres. With three tracks off their debut EP receiving rave reviews, the first release “Concrete” has been selected to feature in upcoming Australian ABC TV series “The Heights”.

“As simplistic and trendy as music can be, there are artists who are changing the game and really giving some of the best quality music anyone would hear. If you need proof look no further than King Ibis with their new song “Backseat Drivers”.”  –  Global Money Group